Financial Focus: I couldn’t make it up! A True Life Story 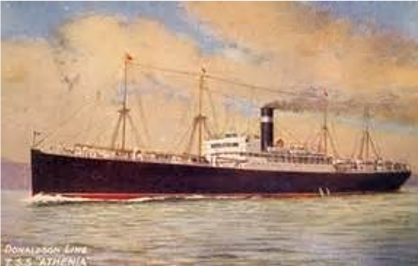 The proof of the pudding in real life is often demonstrated by cases that end up in our Courts. I am also certain there are many where representation ends up being unaffordable and we would only hear of these if we knew the individuals involved.

There are so many reasons why it is important to have not just “a Will” but Trusts too.  Friends and family are typically chosen as Trustees but for impartiality, professional trustees should be considered.

This case, my own family, illustrates why!

I recently learnt my great-great grandfather Cleweth Thomas Lee Donaldson, was part of the Donaldson Shipping Line, which was famous throughout the British Empire, with its colourful advertising, “enormous volume … [of] transatlantic trade” and its “splendid flotilla of first-class steamers”.

The firm had been founded in 1854 by the Donaldson brothers from Glasgow, whose two siblings had also joined the business in the mid-late 19th century. They were ‘self-made’ men, earning their own money, rather than inheriting it.

My great-great grandfather had drawn up a Will so when he passed, my great-great grandmother Jane became an extremely wealthy woman.  They had three children, two of which outlived him. These were Marion and Cleweth.

Cleweth, however was shot down in 1917 over France by the Germans aged just 20.  Cleweth’s early demise meant that under the terms of his father’s will, there were possible grounds for dispute over how much money his sister, Marion, was entitled to inherit.

Cleweth and Marion’s cousin William Betts Donaldson (now head of the shipping line) together with their mother Jane were trustees of their father’s estate.

Jane and W B Donaldson were effectively charged with looking after and curating the brother’s and sister’s shares of their fortune until they inherited when they each turned 25.  But, as one lawyer pithily summarised: “The whole scheme as arranged by the father was defeated by the son’s premature death”. [Sources: The Scotsman, 13 Dec 1921, 28 Oct 1922; Glasgow Herald, 28 Oct 1922]

Marion, now Mrs Gremell and wealthy in her own right, pursued her legacy and this was a famous case in the day.  Known as the famous ‘Donaldson Will Case’ (“Half a Million in Dispute”, as detailed in the Scottish papers).  “Mrs Gemmell claimed payment of the sum of £500,000, representing the accrued interest of her deceased brother’s half share of their father’s estate”.  Heard in the House of Lords in 1918.

The various issues split the judges, but Marion narrowly won her case against W B Donaldson, although the papers didn’t discuss whether the various family relationships had been affected. [Sources: Anthony Slaven, ‘William Betts Donaldson’, Dictionary of Scottish Business Biography, Vol 2]

I have no idea if way back then professional trustees existed – but if ever there was a case for one, my family’s history proves it!

Please note, this article contains general information only and is not to be construed as advice for any personal planning.